You are using an outdated browser. Please upgrade your browser to improve your experience.

In December of 1826 Otis Pettee, a 31-year-old mechanic, with $1,000 purchased from his employer, Simon Elliot, nine acres of land that was home to a shoemaker’s shop called “The Tolman Place” dating back to 1763. In 1828 he built on the highest point his beloved “Sunnyside”, part of which is our Home today. Here he and his wife, Matilda, raised a family of three boys and three girls.

Many years later another Newton resident, Joseph L. Stone, and his wife, Elmira Reed Stone, recognizing a need for housing for the elderly, left in their wills a fund in trust to establish a home for “aged and respectable Men and Women in indigent circumstances.” The Home was to be called “The Stone Institute.” Mr. and Mrs. Stone died in 1889.

The corporation was funded through the generosity of its seven original members and many other interested Newton residents.

The Stone Institute Corporation was created in February of 1894. By 1898 the fund had grown sufﬁciently to enable the trustees to purchase Mr. Pettee’s estate (still in the family), and to renovate and furnish the house. The corporation sought further ﬁnancial assistance from a group of prominent Newton citizens led by the mayor, the Honorable Henry E. Cobb. The corporation was funded through the generosity of its seven original members and many other interested Newton residents. 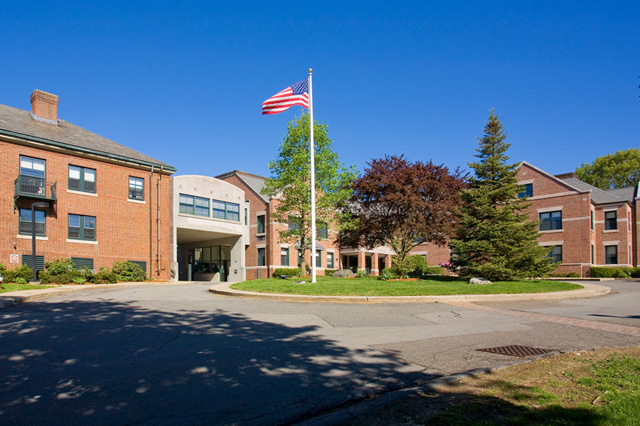 The Home was opened on May 4, 1899, and in his speech at the dedication, on turning over the Home to Mayor Cobb and the Newton Home for Aged People Corporation, Mr. Richardson said the following:

“And now, Mr. President, the Stone Institute hereby conﬁrms its offer to you and your associates of the use and occupancy of this building and its ﬁttings and furnishings, and from time to time the income from its fund, as a gift from Mr. and Mrs. Stone, placing the same in your hands for the purposes of carrying out their wishes and intentions, as expressed in their will. We commit the objects of the charity to the hands of yourself and your associates, citizens of Newton, feeling that they are safely and wisely entrusted to your charge, and we hope that as demands upon the charity increase, and more income is required, that kind hearts and willing hands will readily be found to follow the good example of Mr. and Mrs. Stone.”

In the early 1900s there were ﬁfteen ladies in residence, and the demand for rooms was such that it was determined to build a new wing of The new wing was completed and opened in 1914, a total of 26 residents could be accommodated at the Home.

When sufﬁcient funds were raised, it was proposed to erect another wing and later to replace the old building by a new central portion connecting the two wings. Although plans were drawn and some funds raised in 1950 the project was never completed, which was fortunate since the original 1828 Pettee mansion was thus preserved.

The Rest Home is now called the Pettee House and has accommodations for 22 residents.

Recognizing Phileas LaCasse as an Integral Part of Stone’s History

Come see all that our historic facility has to offer

At Stone Rehabilitation & Senior Living, we offer a historic facility that has been providing residential care and services to the community for over a century.